Gift Planning - What to Do?


Several of our brides to be at Iowa Bridal Presevation have asked us about gifts and what should they do to manage their gifting plans and ponder the question gift planning what to do. So we responded by putting the idea of gifting into some perspective, by adding a little history, examining gifting historically and created a simple framework to enable gift planning and selection.

Historically, a dowry, or marriage portion, is a process whereby parental property is distributed to a daughter at her marriage rather than at the holder's (parents) death. A dowry establishes some variety of conjugal fund, the nature of which may vary widely. This fund ensures a brides support (or endowment) in widowhood and eventually goes to provide for her sons and/ or daughters.

Dowry contrasts with the related concepts called bride price and dower. While bride price is a payment by the groom or his family to the bride's parents, direct dowry is wealth transferred from bride's family to groom and groom's family, ostensibly for the bride. Indirect dowry (or dower) is the property given to the bride herself by the groom at the time of marriage and which remains under her ownership and control. The concept of dowry and related versions is found worldwide. Many countries use different methods and call them by different names. In some parts of the western world the downer is largely a thing of the past but there are still various aspects of it that remain.

From Victorian times till today, the trousseau consists of a brand-new outfit (s) to see a woman through her wedding, honeymoon, and newlywed days. Generally the trousseau did/does not include the wedding gown and often represents a collection or addition of handmade items presented to the bride to be for here special occasion. These outfits were generally not worn before, but saved for her special day.

The hope chest, a custom worldwide, perhaps by different names, but often a chest, box, or cupboard containing a collection of either gifts, hand me downs for the bride intended to be used as she and her husband begin to set up house. The hope chest can be given to young girls many years before her marriage but in preparation for it. They are often the practical things like:, included linens, china, silverware, glassware, kitchen items, furniture, bedding, pillows, tools, and things needed to make a house functional. These items tend to be more feminine than masculine in nature. The chest (containment item) can be very elaborate, as seen in some historical images, or relatively simple like a homemade chest for blankets and keepsakes, and in some cases specially made cupboards which can be dismantled so as to easily transport should the family move to a different location. In the Midwest at least it was common to line the chest with insect repellent wood like cedar to protect the content. When researching the subject one will find some use of the terms dowry and hope chest and their various versions used interchangeably. 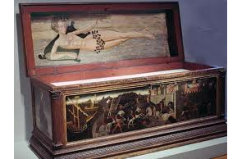 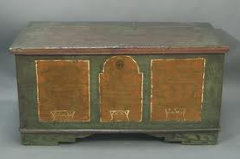 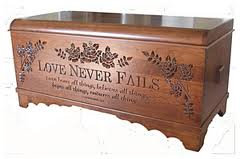 Today it is common practice for the bride to select a shop or store, post her theme, and while sending invitations to her wedding, mention the location of the shop she selected and expect her guests to purchase gifts from same, ie. a slightly different version of the hope chest idea.

Gift selection is not always an easy undertaking. In pondering the question; "What make the best wedding gift?" There are many considerations and in reality the answer rests in the eyes of the beholder, but here is a framework to help put some of it into perspective. When brides at Iowa Bridal Preservation are presented with this framework they find it helpful in shaping their gifting plans.

The things which influence "best" in the eyes of the receiver may be different than those of the giver.

But age, previously married or not, level of education of bride and groom, special interests, children present are some variables to consider.

Something of short term use

Something of long term use

Something for the future

Something of serious humor